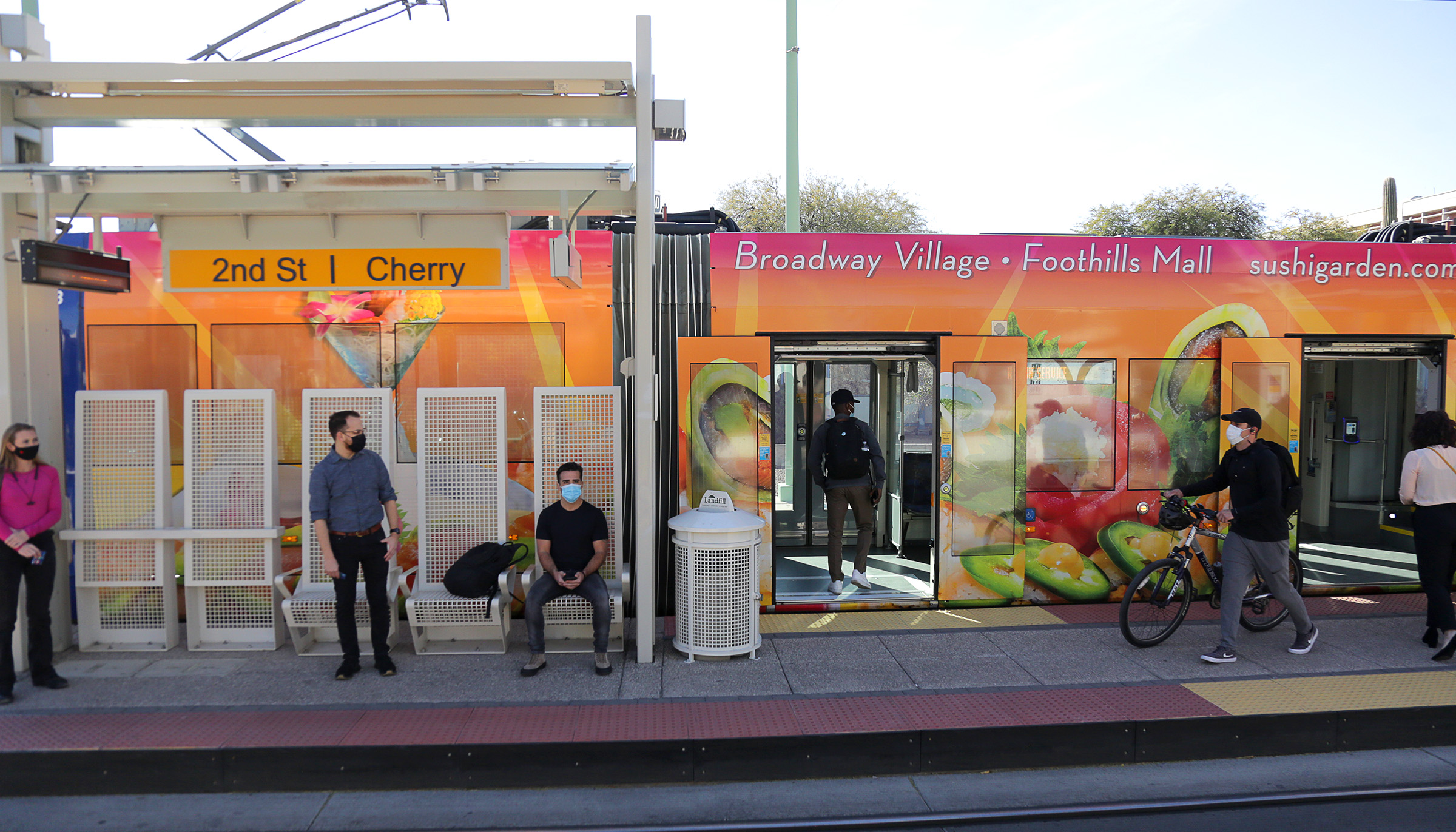 Fare collection has been suspended through at least December 31, 2021.

More than 100,000 people live and work within a half-mile of the streetcar route. It takes approximately 30 minutes to go from one end of the route to the other.

Fares are free so just get on and ride!

Follow us on social media for your chance to win tickets!

Tucson’s Sun Link Streetcar connects five unique districts– Downtown, Mercado San Agustín, Fourth Avenue, Main Gate Square and the University of Arizona. The 3.9 mile route has 23 stops adorned with public art. 350 days of sunshine, home of the Gem & Mineral Show, 4th Ave Street Fair, The University of Arizona and UNESCO’s City of Gastronomy, you can pick up the streetcar to get you within walking distance of hundreds of Tucson’s most iconic restaurants, museums, shops and entertainment venues to new and historic residential neighborhoods.  Leave the driving to us!

Some of the greatest cities in the world are home to vibrant market districts. The Gadsden Company, Mission District Partners and Rio Development are working to add Tucson, Arizona to that list. This dynamic district combines housing, shopping, restaurants, markets and beautifully diverse architecture to create Tucson’s premier transit-oriented development. Located on the West-End of Tucson’s Modern Streetcar line the district is anchored by two shopping centers Mercado San Agustín and the MSA Annex, both situated along the beautiful tree lined Avenida Del Convento.

Wake up in the heart of it all!

Bike from your home to the office and grab a cup of coffee from a local roaster on the way. Simply open your front door to hear live music, from mariachi to folk to opera. Be within walking distance to everything that you need – from the pleasures of your favorite restaurants and nightlife hot spots to local markets and wellness destinations.

As Arizona’s land-grant university, we are driven to do great things. It’s our passion to transform the lives of our student Wildcats and to solve some of the biggest challenges facing our state and the world.

But what makes us unique is how we do it. We live our purpose, mission and values every day. And we do this in one of the most incredible places on Earth, surrounded by majestic mountains and Saguaro forests, and under a sky that ignites imaginations with cotton candy sunsets and diamond-filled nights. At the University of Arizona, everywhere you look is filled with wonder. Home of the 2021 Women’s NCAA National Basketball Champions!

Discover flavor, style and attitude when you visit Main Gate Square, a pedestrian-friendly dining and shopping destination featuring over 20 retailers and 30 restaurants near the University of Arizona and Tucson’s historic neighborhoods. Experience the flavors of the Mediterranean, India, Greece, Asia, Thailand, Mexico, Japan, Vietnam and everywhere USA. If it’s fashion you want, you’ll find the right style for you or the perfect gift for someone else. Or relax at one our seven salons and spas. Live music, jam sessions, wine tastings,and karaoke enhance Main Gate Square’s high energy, urban atmosphere. Life happens here.

Spend the day. Enjoy the night.
Open 7 Days Per Week
Hours of Operation Vary by Merchant
Restaurants Serving Breakfast, Lunch or Dinner
You’ll find something to eat from 6 am to 3 am

The Historic Fourth Avenue Business District is directly northeast of and adjacent to downtown, Tucson, Arizona and part of our thriving City Center.

Fourth Avenue became a commercial district after the construction of the Fourth Avenue Underpass in 1916. In 2016, the Avenue’s 100th anniversary, the North Fourth Avenue Merchants Association requested Poster Frost Mirto (Corky Poster, Charles Pifer, and Jennifer Levstik) in cooperation with the City of Tucson (Jonathan Mabry), to nominate Fourth Avenue Commercial Historic District to the National Register of Historic Places.

Fourth Avenue’s historical centrality and available open space meant that the corridor was advantageously situated to become a commercial district. During its height (1920s–1930s), it met the needs of neighboring communities—in essence becoming a precursor to the strip mall where businesses began moving into the suburbs away from the urban core. Between 1916 and 1967, the District’s location provided ready access to goods and supplies imported by the railroad and neighboring warehouses, and could accommodate University students, downtown business people, and neighbors. Today this vibrant commercial corridor is populated by over 140 locally owned boutiques, bars, and cafes; all residing in historic buildings.

The Sun Link Tucson Streetcar was our city’s largest construction project ever and it has already made positive impacts:

Tucson’s modern streetcar vehicles were the first order of vehicles manufactured in the United States in nearly 60 years.

Since its launch in 2014, the Sun Link streetcar has triggered over $1 billion of private investment, which as funded new retail, office and residential development and redevelopment along the streetcar corridor. Ninety new restaurants, bars and cafes, and retail businesses have popped up along the route over the last 3 years. Additionally, there has been significant housing, retail and corporate business expansions within the Sun Link route.

The streetcar system has inspired transit oriented development and encourages people to walk and ride to more of their favorite destinations, rather than driving. Additionally, each streetcar vehicle is bicycle friendly so people can bring their bikes as well.

The Sun Link Operations & Maintenance Facility is a LEED (Leadership in Energy and Environmental Design) Silver certified building. LEED projects are certified by the United States Green Building Council and demonstrate leadership, innovation, environmental stewardship and social responsibility, and are designed to:

The Sun Link streetcar system, launched in July 2014, is funded as part of theRegional Transportation Authority’s 20-year voter approved plan and tax, effective through June 2026. Vehicles and construction costs were funded by the RTA, federal grant and local funds. The RTA continues to contribute to operating costs.

How Tucson could Benefit from the Infrastructure Bill
YouTube Video VVVZZlg4cVlMTWRwLUUwUnI3VDlVMnV3LnU4ZFJfZDNvaHdB

Sun Link welcomes back U of A students
YouTube Video VVVZZlg4cVlMTWRwLUUwUnI3VDlVMnV3Lms3aVNhS2lPUjNv